Dhr.G.van Assen †, retired police officer and detective almost throughout his life and as a member of the resistance during world war ll with some special decorations he has many interesting life stories.
Made for a book called ‘Ontmoetingen met Amersfoorters” among 50 portraits this was a special meeting i will never forget. He showed me pictures and stories, old newspapers and some tales of his life as proud as an old man can be what he witnessed. He said i like you, your not mister photographer your just a normal guy with a camera interested in people taking time to listen. A bigger compliment then i ever could imagine at that time. So at the end of the meeting i took some pictures with my old Rolleiflex SL66.
His sharp look still so alive and proud with his picture in the book and at exhibitions where he came with his family and the large print hanging for months at the central train station in his home town.After he died at 92 his picture was used for the funeral card, what an honor ! And now his picture is featured at the portrait awards 2017 at Lensculture. His daughter said papa would be very proud!

Congratulations! One of the photos you entered has been selected by our editors to be featured in the LensCulture Portrait Awards 2017 Competition Gallery, visible to everyone who visits the website. The Competition Gallery is a highly curated group of images selected by our editors to showcase only the best photos from entrants, so this is great news. 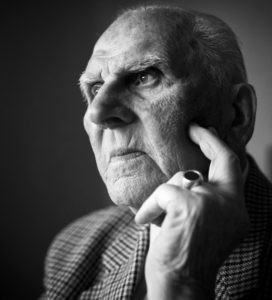